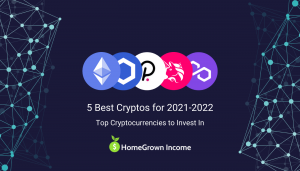 In this article, I’m going to show you 5 promising coins you can buy low and sell when it is on the high, remember Bitcoin is not part of these 5 cryptocurrency.

These are coins that have already established themselves as one of the assets investors have already put their money into and in no time, it will moon.

Let’s check them out.

Firstly, let’s check out what cryptocurrency is.

A cryptocurrency is generally referred to as digital or virtual money that we can’t touch but exists in the form of a “token or coin”. they are mainly digital and they are used on the internet as a store of value but can also be used to purchase goods or pay for service in the physical world with credit card or any other payment project, the large authority of it remains entirely invisible.

Cryptocurrency is mainly built on blockchain which makes it decentralized, that is, out of anyone’s controls and they are made up of compliments of cryptocurrency, hence the keyword “crypto”.

CRYPTOCURRENCY AS A STORE OF VALUE.

Cryptocurrency like Bitcoin was created to serve as the means of peer-to-peer transaction, later on, coins like Etheruem and litecoin come up into existence also as a form of transaction and store of value including Bitcoin.

Investments like stock, bond, real estate, have been known as a form of investing your money or making it work for you many years ago, but since the creation of Bitcoin by Satoshi, cryptocurrency has developed itself to be considered as one of the best investment to look up to and a better way to beat out inflation.

Cryptocurrencies are mostly designed to escape government control and they are mainly managed and owned by the holders or investors. There are more than 10000 cryptocurrencies to invest in, some are coins and also some are tokens, though many of the cryptocurrencies have little to no trading volume.

5 CRYPTOCURRENCY TO BUY INSTEAD OF BITCOIN.

Etheruem was created in the year 2014, it is the second cryptocurrency with the largest market capitalism. It is a decentralized software platform that enables smart contracts and decentralized applications (Dapps) to be built and run with any downtime, fraud, control, or interference from a third party.

As an investor that is looking for a better coin to invest instead of Bitcoin, Etheruem is a good project to put your money into as it will increase in value as the software platform continues to build in Dapps and smart contracts for other upcoming cryptocurrency projects.

Litecoin is largely referred to as the” silver to Bitcoin Gold” and it is also mainly accepted as a form of payment network just as Bitcoin is not controlled by any authority or government and it uses the script as a poW.

Litecoin is one of the oldest cryptocurrencies to be created as they were created way back in 2011,2 years after the creation of Bitcoin. it is market capitalism of over 9 billion dollars and is also considered as one of the largest capitalism in trading.

Avalanche is been considered in this list because of its open-source and non-custodial protocol which enables you to earn interest on your deposit and borrow assets and it also allows you to lend, borrow and earn interest on a crypto asset without a third party, your funds is also secure because it’s decentralized.

As an investor, if you want a promising cryptocurrency project to invest in, you can consider investing in an avalanche as it is a software protocol that enables its users to earn interest on their lend, borrow crypto assets. Avalanche was created in 2017 by Stam Kulechov as a profit-making company and it has a market capitalization of 1.9 billion dollars with a maximum supply of 10,000,000.

Polkadot is a blockchain-oriented project whose vision is to connect permissioned and permissionless blockchain as well as oracles to allow systems to work together under an ecosystem. rather than for developers to just build Dapps on Polkadot, it also allowed them to build their blockchain with their native tokens for specific use cases.

If you are looking for a unique POS cryptocurrency that aims at delivering interoperability among other cryptocurrency projects to invest in, I guess you should consider polkadot.

associated with trading on the Binance Exchange. It is the third-largest cryptocurrency

by market capitalization. Those who use the token as a means of payment for the exchange can trade at a discount.

Binance Coin’s blockchain is also the platform on which Binance’s decentralized exchange operates. The Binance Exchange was founded by Changpeng Zhao and is one of the most widely used exchanges in the world based on trading volumes.

Binance Coin was initially an ERC-20 token that operated on the Ethereum blockchain. It eventually had its mainnet launch. The network uses a PoS consensus model. As of February 2022, Binance Coin has a $73.5 billion market capitalization, with one BNB valued at $436.

With over 2 trillion cryptocurrency market capitalism, it is wise that you choose a coin that you are best to have interested in investing in. I’ve listed out best among the large community of cryptocurrencies for you to invest in.

Have you already invested in these cryptocurrencies?.

Which coin is missing?

I would love to read your thoughts on the matter.

Our vision is to bring crypto and blockchain industry education to people in a simplified way.
+234 (0) 708 744 7145
info@cryptospace.academy